Most often, blood comes from an obvious source, such as a cut or a bite wound. It’s critically important to stop the bleeding as rapidly as possible:

People automatically think of accidents or trauma as the most likely cause of bleeding in pets, but there are many other possible causes. In particular, it’s common for animals to lose blood from their digestive tract and in their urine due to disease. Blood loss nearly always indicates serious disease: whenever blood is seen coming from a pet, it’s important to seek the help of a vet.

Many people have heard about Parvovirus, which is the classic cause of blood-stained diarrhoea in dogs. However there are many other causes, and often, with the right treatment, animals’ lives can be saved. It’s important that affected animals are rushed to the vet as rapidly as possible, even if it’s night-time or the weekend. This type of blood loss quickly leads to

Emergency treatment, including intravenous drips, antibiotics, and nursing care, help an animal to remain stable until their body is able to heal the damaged intestines.

What about bloody urine? Unless there are dramatic quantities of blood, this isn’t usually the same type of life-threatening crisis as blood loss from the digestive tract. There are many possible causes, including

Cystitis is one common cause of the blood in the urine, and cats are often affected.

Cystitis can be caused by a number of different factors, and the treatment of each can be different. It’s important to make a specific diagnosis as possible. X-rays and for tests on samples of blood and urine are important.

In some instances, the bloody urine can turn out to not be as dangerous or life-threatening as many other types of blood loss, but it is important to always get it checked out.

Owners are generally quick to spot the problem when animals suffer visible blood loss, but there’s one type of bleeding crisis that is exceptionally challenging: internal bleeding.

This can happen after an accident; it can also occur if there’s a problem with blood clotting, such as after eating rat bait or following lungworm in dogs.

Blood leaks out of damaged blood vessels internally: there’s no bright red warning sign for owners to spot. Bleeding can happen into the abdomen, the chest, or even inside the skull.

How To Spot Internal Bleeding

To an owner, the only sign may be a pet that’s not behaving normally: there may be dullness, difficulty breathing, swelling of the abdomen, or even complete collapse. It’s usually obvious that the animal is so unwell that urgent veterinary attention is needed. As with external bleeding, emergency treatment can be life saving.

Bleeding – whether visible or invisible – is one of the biggest crises that animals can face. If you’re ever faced with that red sign of danger, don’t hesitate: rapid treatment could save the life of your pet.

It’s no accident that the colour red is used to indicate danger. Signs that say “Stop”, “Beware” and “Danger” are nearly always written in red writing, or are posted on a red background. The reason why red is used in this way? It goes back to a basic understanding of the world. Blood is red, and whenever we humans see blood, we know that there’s something wrong. The sight of the colour red has been genetically wired into our brains to alert us to danger. 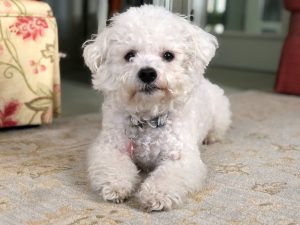 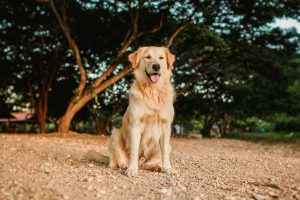 Illness and Treatment
Sharifa had lost weight, was drinking more and seemed weaker…