Sierra is a magnificent bird. He’s the resident bird at a hotel complex where I stayed recently. I was at the biggest veterinary conference in the world, held in Florida every January, and meeting Sierra was one of the perks of the trip.

Sierra has three cages, and he moves from one to the other at different times of the day. His main daytime perch is in, or on, a poolside cage. He likes to keep an eye on visitors in the swimming pool, saying hello in his broad southern American accent, or just screeching at them as they pass by. He’s a popular and striking bird, with his bright colours and long tail feathers. He has another cage indoors, by the hotel reception, and if it’s raining or windy, this is where he prefers to stay. Finally, he has a night-time cage, where he’s taken to sleep at the end of the day. This cage is his “snug”, and he even has his own bed-side sound system. A specially designed mini-sound system has been set up, playing sounds of the rainforest, complete with bird calls, frog croaks, and cricket song. This is recommended by parrot behaviour specialists, to create a reassuring relaxing background sound for a tropical bird like Sierra. Sierra was bred in captivity, so he’s never known about life in the wild, but the noises from his ancestors’ habitat still have some type of soothing effect on him.

Parrots can be sensitive birds, and Sierra’s owners take his health seriously. He’s taken to visit a specialist avian vet every three months for a general health check, even though he always seems in sparkling good health. He has his nails clipped, his beak checked, and he has his wing feathers trimmed so that he cannot fly too far.  If this was not done, there’d be a risk that he’d fly away from home, and he wouldn’t be able to survive in the wild in Florida. There are numerous raptor eagles and buzzards, and he’d be unable to take care of himself.

Every six months, the vet collects blood and droppings from Sierra, to screen for parasites and any other signs of an underlying disease. These “wellness” checks ensure that any health problem would be spotted in the earliest stages, making it much easier to treat him successfully.

He did have one health crisis when he was a young bird, and it almost killed him. He swallowed a whole peanut, shell and all, and it became lodged halfway down his gullet. It wasn’t easy at first to diagnosis what was wrong with him; he was dull and quiet, with difficulty breathing. He was rushed to the bet, and major emergency surgery was needed to save his life. He made a full recovery, but he still has scar tissue on the left side of his throat; if you look closely, the feathers in this area are grey and sparse.

After the peanut incident, Sierra was put onto a special type of pelleted food, designed to be safe and complete for parrots. He still gets occasional treats, such as grapes or other pieces of fruit, but he seems happy with the pellets, and it’s easy to see from looking at him that he’s in optimal health. 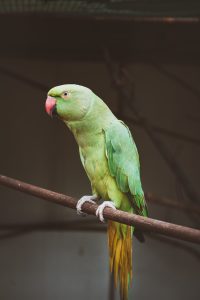 Parrots Have Feelings Too
Real Life Stories
How do you treat a depressed bird? The starting point was no… 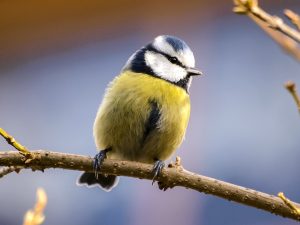 Nursing a Wild Bird Back to Health
Illness and Treatment
The best course of action is simple: try to reunite the fled… 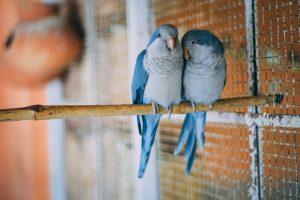 General Illness
Beak disease is commonly caused by a tiny mite. The most eff…