Veronica has always liked hens; her mother used to keep them in the family’s back garden in North Dublin, back in the 1950s, and Veronica’s late husband, Chris, used to keep hens in their own back garden in Bray. When he fell ill a few years ago, he gave up this hobby, and the henhouse and run had stayed quiet and empty. Chris passed away last winter, and this summer, Veronica found herself thinking about the empty hen run. Wouldn’t it be lovely to re-stock it with a new batch of hens? She felt that Chris would have approved of this idea.

The original henhouse and hens had been bought via a Wicklow-based website, www.farmfowl.com. The website still has a shop that sells equipment that’s perfect for anyone setting up their own back-garden chicken run, and there’s also plenty of good advice on how to keep hens successfully. But the website no longer sells the hens. Veronica asked around and discovered that she could buy hens directly from a weekly market in Ashford.

Before getting the hens, she had to clean out and freshen up the hen run; after three years of lying idle, cobwebs had to be dusted off, new grass had to be planted, and everything needed a good clean up. Once it was ready for new arrivals, she headed off to the market, coming home with four young hens in the back of her car.

In times past, hens were sold at “point of lay”, at around four to six months of age. These birds are literally about to start laying eggs, and the idea was that as soon as they had settled into your hen run, they’d be laying eggs for you every day. These days, margins have become much tighter for chicken sellers, and it’s more common for hens to be sold at a younger age, so that the person selling them doesn’t have to go to the expense of paying for their food for any longer than they need to do. The hens that Veronica bought are young – probably no more than a couple of months old – so they are not likely to start to lay eggs for another few months at best. However they were not expensive, at only €9 each. Veronica is happy to wait for her eggs; it gives the hens plenty of time to settle into their new home.

And as Veronica discovered on that first day, hens do need time to settle in. She released them into the run in the early afternoon, and it was obvious that they felt quite disorientated. They huddled together in a group, hunched down, looking around nervously. They had probably been hatched and reared in an indoor type of barn, so it was strange for them to be outside. However, within a few hours, they began to relax, pecking in the grass and looking around with curiosity.

The challenge for Veronica happened at sunset. The hens need to be shut into the henhouse every night, to protect them from predators like foxes and mink. The bigger run is perfect for the day time, but it’s too open for the hours of darkness. Foxes, especially, are often able to break through fencing, so it’s important to have a double layer of security to protect poultry.

Hens are creatures of habit, and they soon learn the routine of “going to bed”. Most hen owners just need to call out “bed time”, and their hens will dutifully troop into the henhouse. In fact, Veronica even has an automated henhouse door called a Chickenguard, which works like an electric gate. The door has light sensors that mean that it closes automatically at nightfall, opening again with the daylight of morning. In the past, her hens knew the routine, and they would go into the henhouse as dusk fell, all on their own, so that Veronica didn’t need to get involved. However her new arrivals haven’t had time to learn this routine, so for the first few nights, Veronica knew that she’d have to put them to bed herself, by shooing them in, then shutting the door after them.

She went out to the hen run as night fell, hoping that the hens would naturally want to go into the safe, enclosed indoor area of the hen house. It turned out that they had other ideas. There was no way that they’d allow her to herd them into that strange wooden building. They had already become used to the freedom of the larger hen run area, and they didn’t want to leave it. So Veronica spent a frustrating hour chasing the hens up and down, trying to catch them once she realised that they refused to be herded. It was pitch dark by the time she finally managed to get them all in.

When she opened the door to let them out the following morning, they were already more at ease with their new home, pecking around the grassy run with interest. And for the second night, Veronica had worked out how to open the back of the henhouse, with a much larger entrance way, making it far easier to hush the hens into their sleeping area. She’s confident that within a few days, they’ll all be happily putting themselves to bed, as generations of hens have done before them. 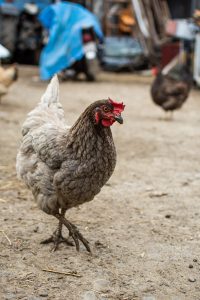 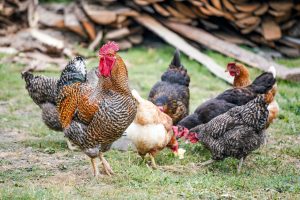 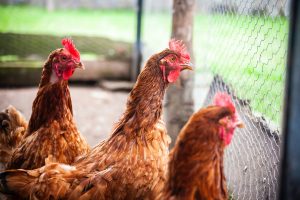 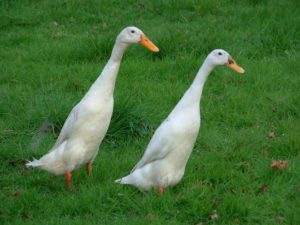